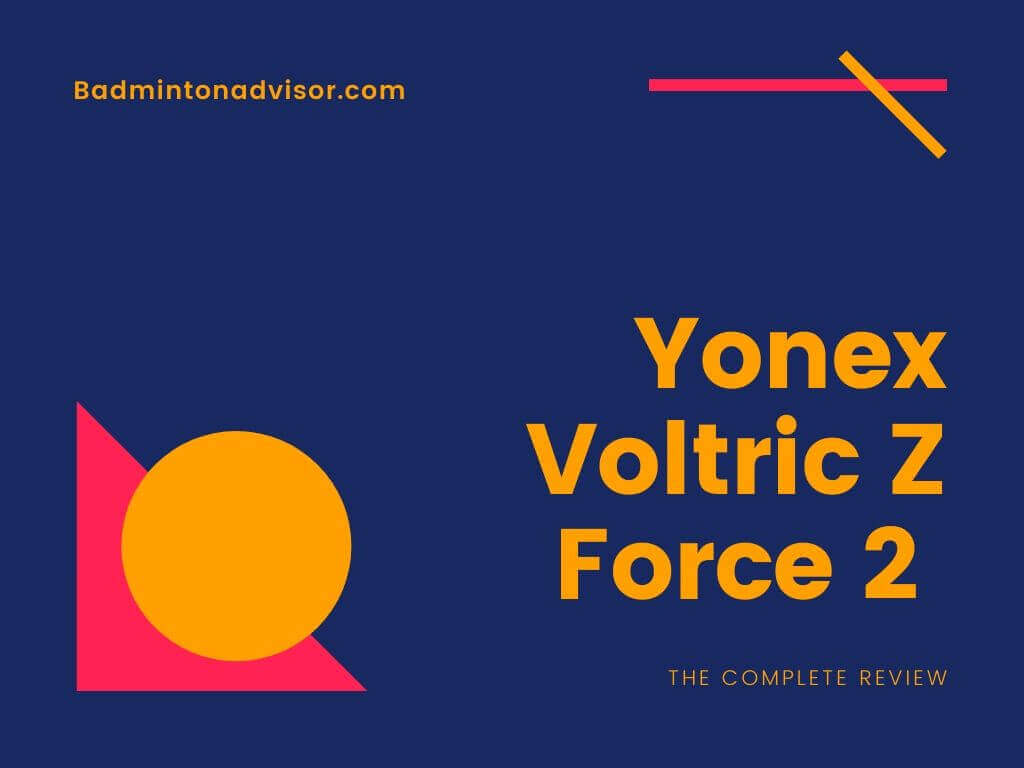 The Yonex Voltric Z Force 2 is one of the most famous Yonex badminton rackets, this racket was launched in 2014 during the All-England Super Series, and it was the favorite badminton racket of Lee Chong Wei.

The Voltric Z Force 2 comes with many new features, a different design philosophy, and many more.

In this Yonex Voltric Z Force 2 review, we will list all the features of this racket, its performance during a typical badminton game, and more importantly, we will view its pros and cons and answer some questions asked by our viewers who are planning to buy this badminton racket.

Yonex Voltric Z force 2 have a minimal design that is uncommon with most badminton rackets on the market, the colors are simple and not flashy, the racket is mostly black with some blue dots, this timeless design makes the racket a great choice for many players including casual player that love to own a racket for a long time.

The aerodynamic frame of this racket is very slim to maintain a faster swing, this feature was mostly for advanced players, the slim design reduces the air resistance and minimize the feel of having a head heavy racket (less strain on the arm of the player).

The slim size of the frame gives more handling and control to the player, which is essential during tournaments when a single shot can change the result of the game.

This frame got an Isometric shape, this design gives a similar length to the vertical and horizontal strings to have an expanded sweet spot and gives more precision to the racket.

Stringing this racket is easy and more effective due to the multiple grommet holes.

The vibrations that can hurt the player control level are minimized by the built-in solid core, this is the same core that is used on most modern Yonex rackets.

In a previous article, we talked about the benefits of the Tri-Voltage system, this system ensures the flexibility of the frame in a way that the bed of the racket stays in contact with the shuttlecock for a longer time to generate more power during each swing.

The shaft of the Yonex Voltric Z-Force two is the thinnest shaft made by the company, being thin doesn’t mean weak, the nanometric carbon technology used in this racket makes it very strong and aerodynamic.

If you are looking for an answer to the question: What is the best badminton racket for smash? The Yonex Z Force 2 will be the perfect choice for you, you can throw smashes over and over again, if you have the chance to do a powerful smash with this racket, most opponents will be unable to react and return the shot.

But there is an important remarque here, to perform these strong shots you need to have some prior badminton training to take the most advantage of this racket, some players said that you need a lot of power to flex the shaft, and if you fail to generate this power, you smash will turn into a drop shot.

There are two main ways to find the difference between an original and a fake Yonex Voltric z force 2?

Yonex Voltric Z Force was released in 2014 during the All-England Super Series.

What is the max tension of the Yonex Voltric z force 2 badminton racket?

The maximum tension for Yonex Voltric Z Force 2 is 28 lbs.

What is the recommended string tension for Yonex Voltric z force 2?

The recommended string tension for the Yonex Voltric Z Force two is between 20 to 28lbs depending on the version of the racket.

The best string for Yonex Voltric z force 2 is the BG 65, you can check it here.

Yonex Voltric z force 2 is an exceptional and expensive badminton racket, but it is totally worth it, many players train hard to improve their badminton skills, and this racket is exactly for those players, a great design and high performance, this is by far, one of the best badminton rackets on the market today.

Some of the links on our website are affiliate links. And as an Amazon Associate, we earn a commission on qualifying purchases after clicking on those links, at no additional cost to you.

As an Amazon Associate, we earn from qualifying purchases.